This is GREAT news for MTConnect and the world of manufacturing!

Note: I received permission from Cisco to both use their logo and and to state Cisco joined MTConnect.

Cisco’s Bryce Barnes is also presenting at [MC]2 2015 and below is from the MTConnect Conference web page.

Making the IOT a Reality and the Role of MTConnect

“Cisco leads the world in networking technology and coined the term the Internet of Things (IoT). Cisco CEO John Chambers has stated that the IoT market will generate an astounding $14 trillion in value over the next decade. As a September 2014 Network World article stated, “IoT is the intelligent connectivity of smart devices, expected to drive massive gains in efficiency, business growth and quality of life. In other words, when objects can sense each other and communicate, it changes how and where and who makes decisions about our physical world.” MTConnect is an enabling technology for IoT in manufacturing. Cisco as a new member of the MTConnect Institute is looking to participate in the rapidly growing community of Machine Builders and manufacturers who find tremendous value in the MTConnect model. In this talk, Bryce Barnes will discuss Cisco’s IoT and manufacturing vision, real life examples of IoT, and the value of MTConnect to manufacturing in this rapidly converging world of connected things.”

All the employees at Memex Automation would like to take a minute to thank and recognize our very first software developer co-op student, James Li, from the University of Waterloo.

James started for us this past fall in a full time co-op position as a software developer.  In the months that James was with the Memex Software Development Team, he managed to work on number of critical projects for us. James setup a new world-class continuous testing environment, created a configuration and capacity testing tool for MERLIN that allows us to properly gauge unlimited workloads as well as wrote numerous pieces of software for our future MERLIN 3.0 Manufacturing Executive System (MES) platform such as security modules, software metric widgets and many other impressive pieces of software.  Not only did he complete every task he was given ahead of schedule, but these assignments were extremely well designed and well written, and he did so with such enthusiasm that it was an absolute joy to have him on our team.

James Li is a talented young man and we very proud to say he was our first co-op student at Memex Automation!

We wish James all the best!  (And sincerely hope that he comes back full time!)

Love from,
The Memex Team

James, with his special Memex Automation memento, for all the hard work he put in.

In Recognition of Outstanding Software Development, Presented to James Li

The Development Team took James out to a celebratory lunch.
Looks like they had a great time!

David McPhail did a great interview at FabTech last week on Wednesday the 12th on Manufacturing Talk Radio!

David does a fantastic job educating the hosts on MTConnect as well as Memex Automation’s ability to talk to ANYTHING on the shop floor. David puts everything in the language that everyone inside or outside of manufacturing can easily understand and appreciate.  David talks about MTConnect at the beginning and really gets into specifics at the end of the interview.

I thought the interviewers did an outstanding job in the types of questions asked as well as the follow up questions.

David starts speaking at the 129 minute mark on Wednesday.  David’s segment is about 25 minutes in length.

David brings out a very important metric.  If you ask a shop or plant what their utilization is, invariably they will state something in the area of 65%.  When you actually come in and measure it, the number is more like 27% to 32%  That is a HUGE difference! As David states, “if you cannot measure it, you cannot manage it.”

Dave Edstrom gives a recap of the incredibly successful IMTS 2014 from his blog Photons and Electrons.

Below was the view from our booth to Lake Michigan.  We had the fountain in the middle, food on the left and beer on the right.  THE best location of ALL the 1,900 exhibitors! 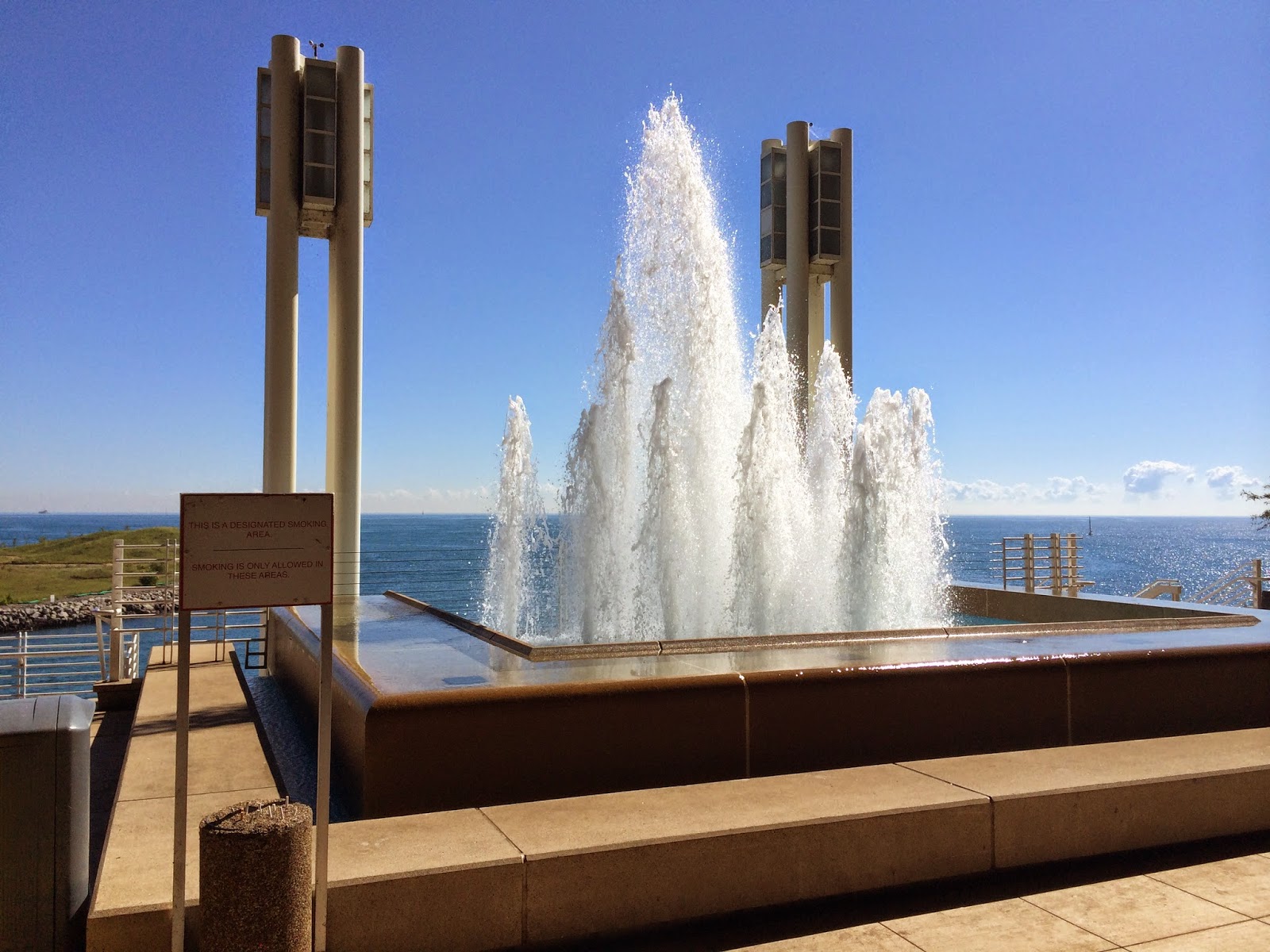 The first person I must thank is Wanda Smith (Tim Smith of Memex Automation’s wife) who is an Executive Chef and came to the two houses we rented to cook for us.  Wanda made AMAZING MEALS!  Even though we were spending 12 to 14 hours a day on our feet, I STILL GAINED weight thanks to Wanda’s incredible cooking! 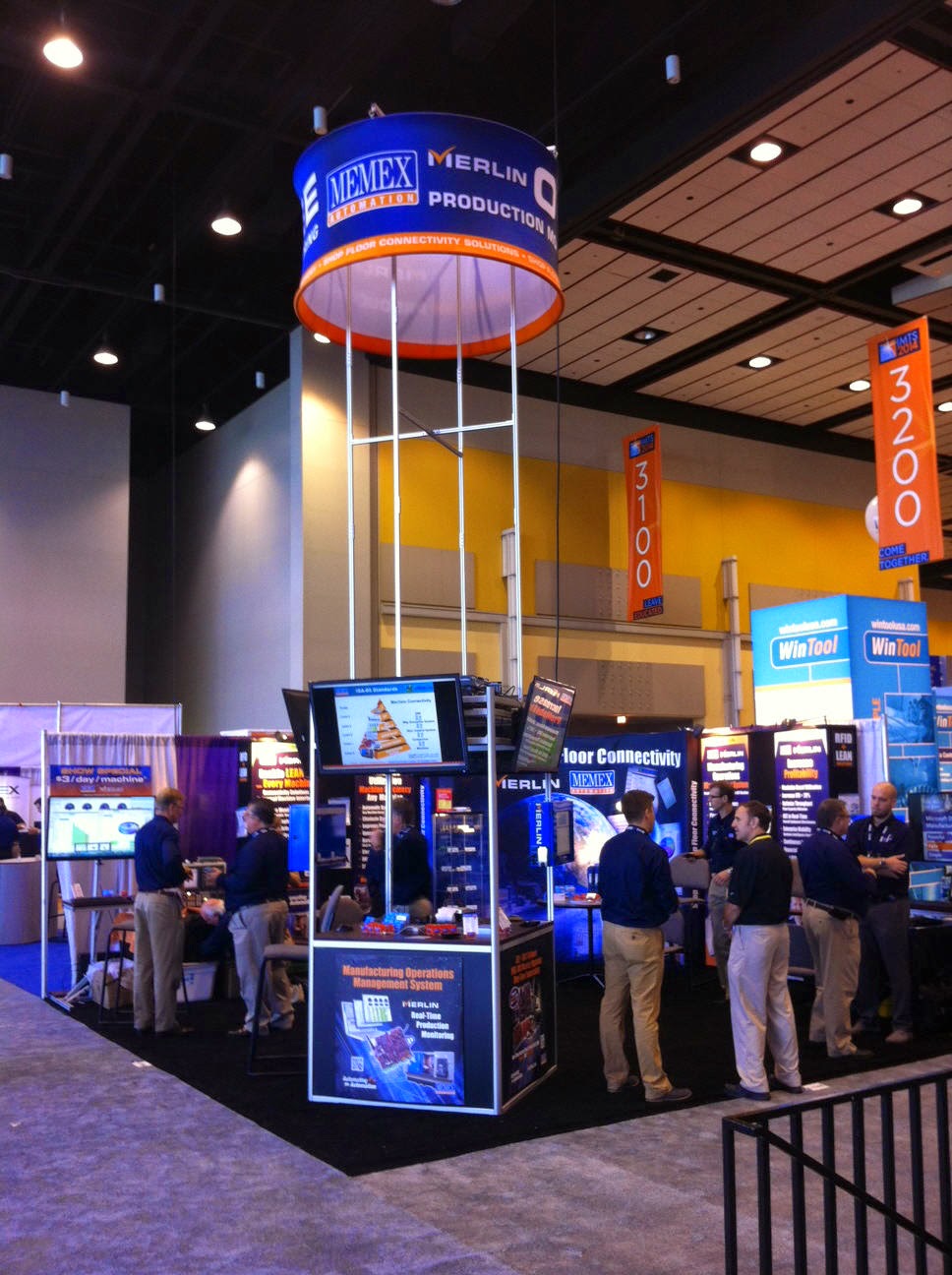 Above is the Memex Automation booth at IMTS E-3368 at IMTS 2014. We built it and broke it down ourselves.
It must be said that what makes ALL OF THIS POSSIBLE, is the GREAT hardware and software developers at Memex Automation that busted their butts around the clock to make this a reality! 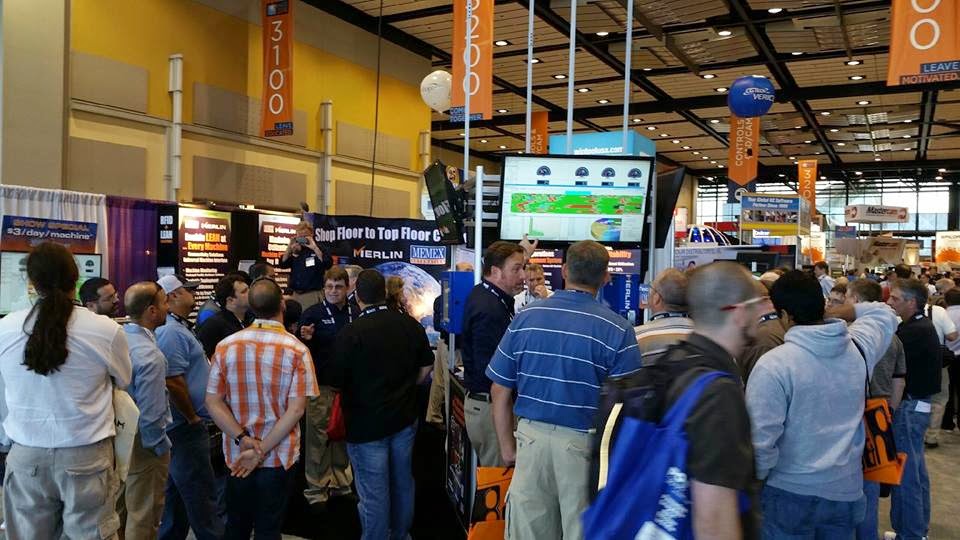 Above and below was a typical day at IMTS 2014 with TONS-O-People waiting to speak to us. 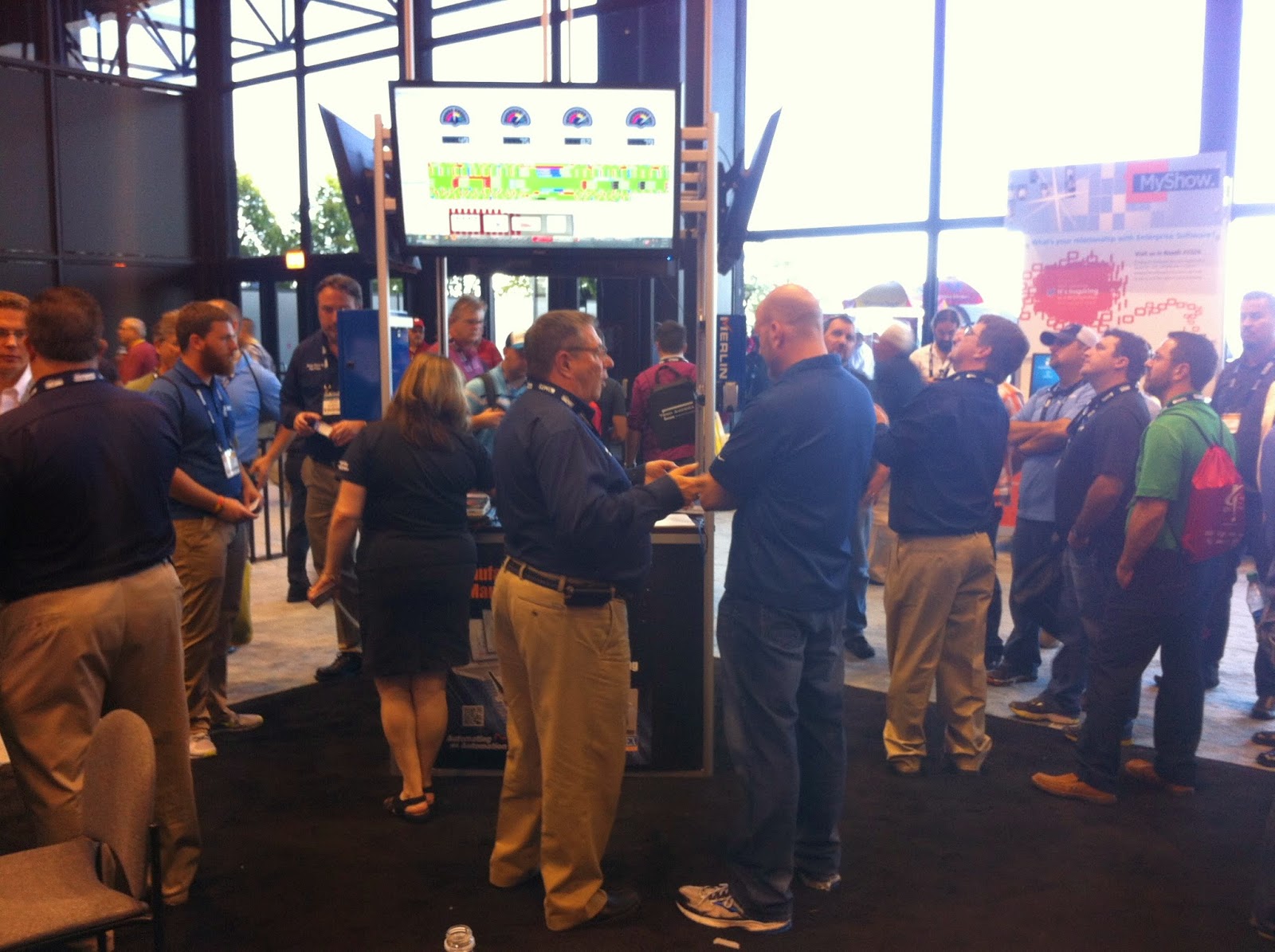 It was like this the ENTIRE time.  It was amazing the amount of interest that we had in all of hardware and software products. 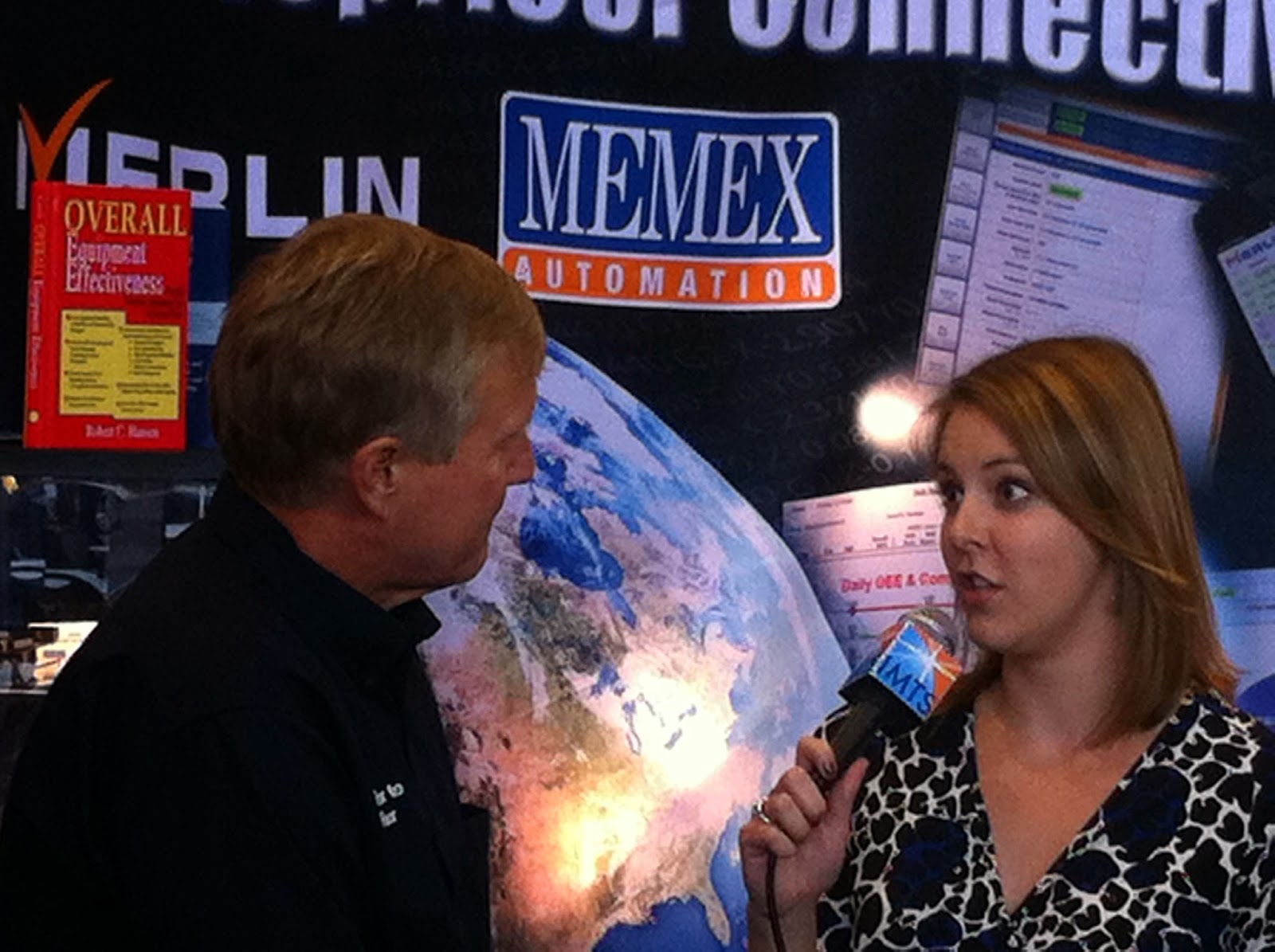 Above is Whitney Brown of AMT interviewing me for IMTS-TV and she is speaking with David McPhail below. 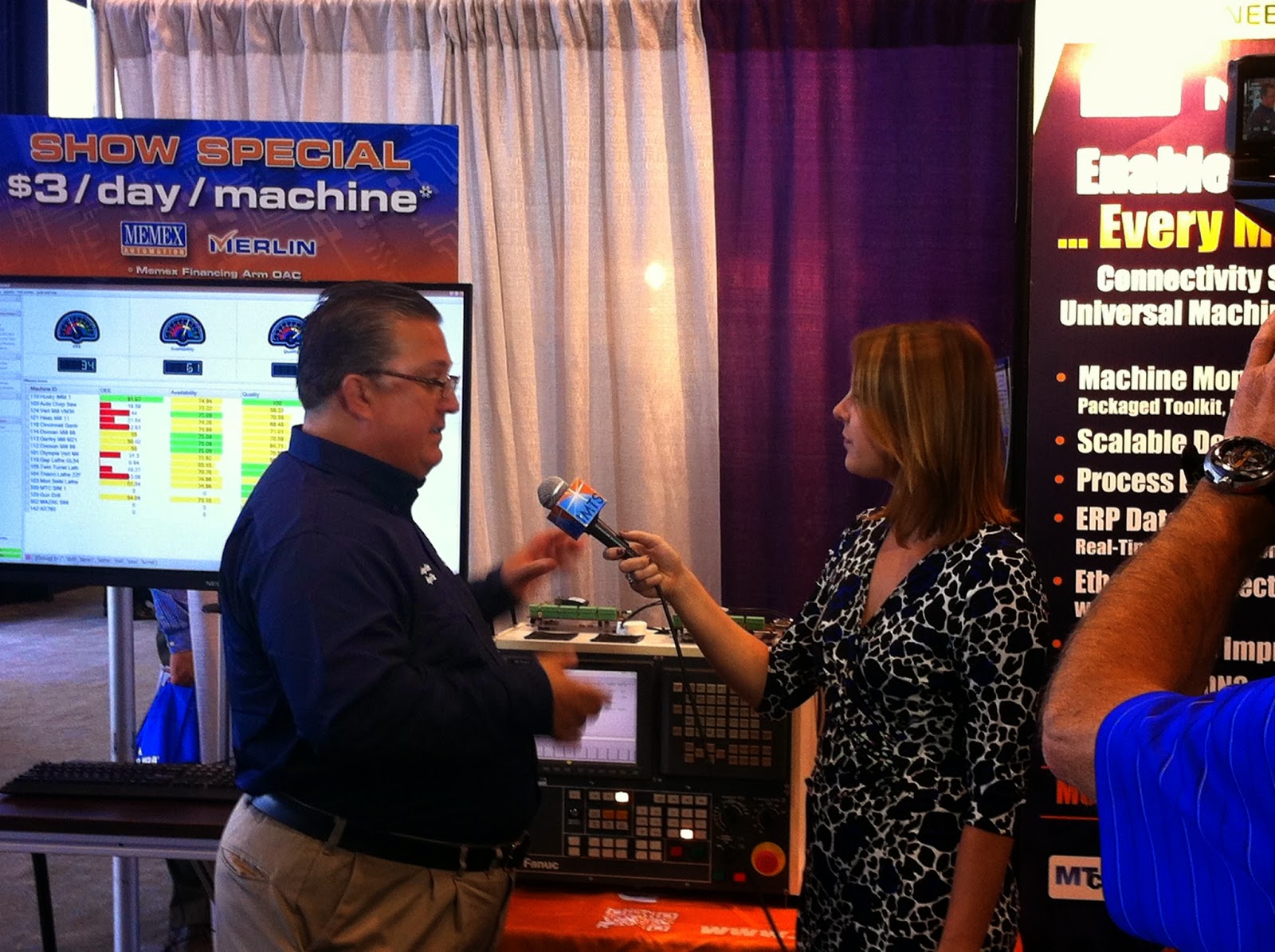 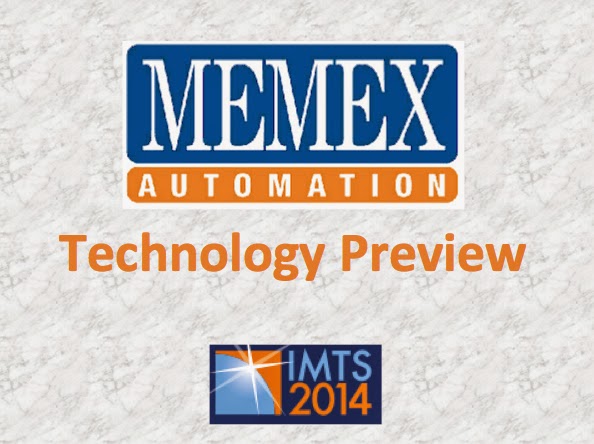 Above we are taking customers and prospects through our Technology Preview of hardware and software products through the end of the year and well into 2015.  Everyone was very impressed! 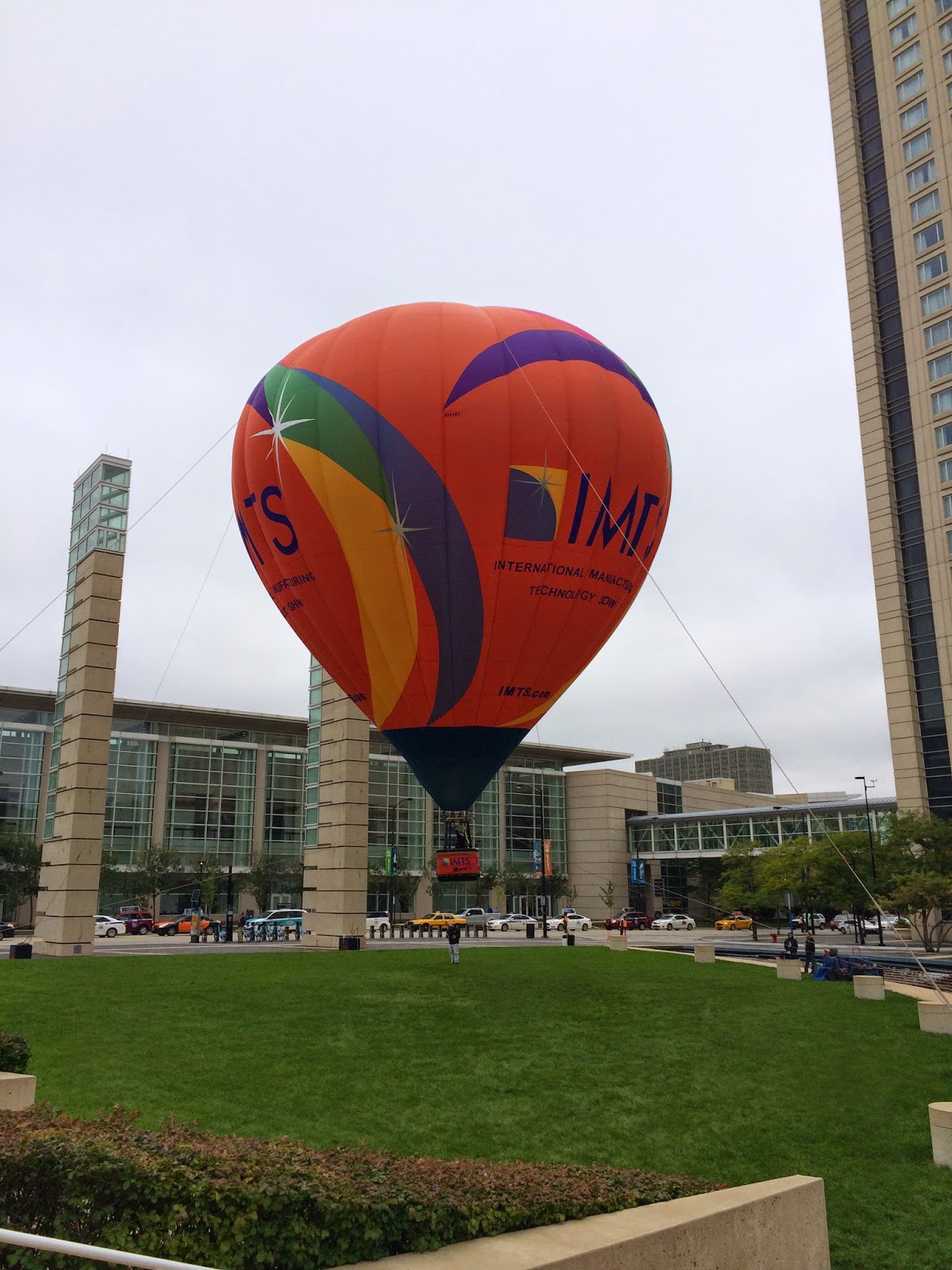 Above is Peter Eelman’s IMTS balloon that he purchased that is always at IMTS. 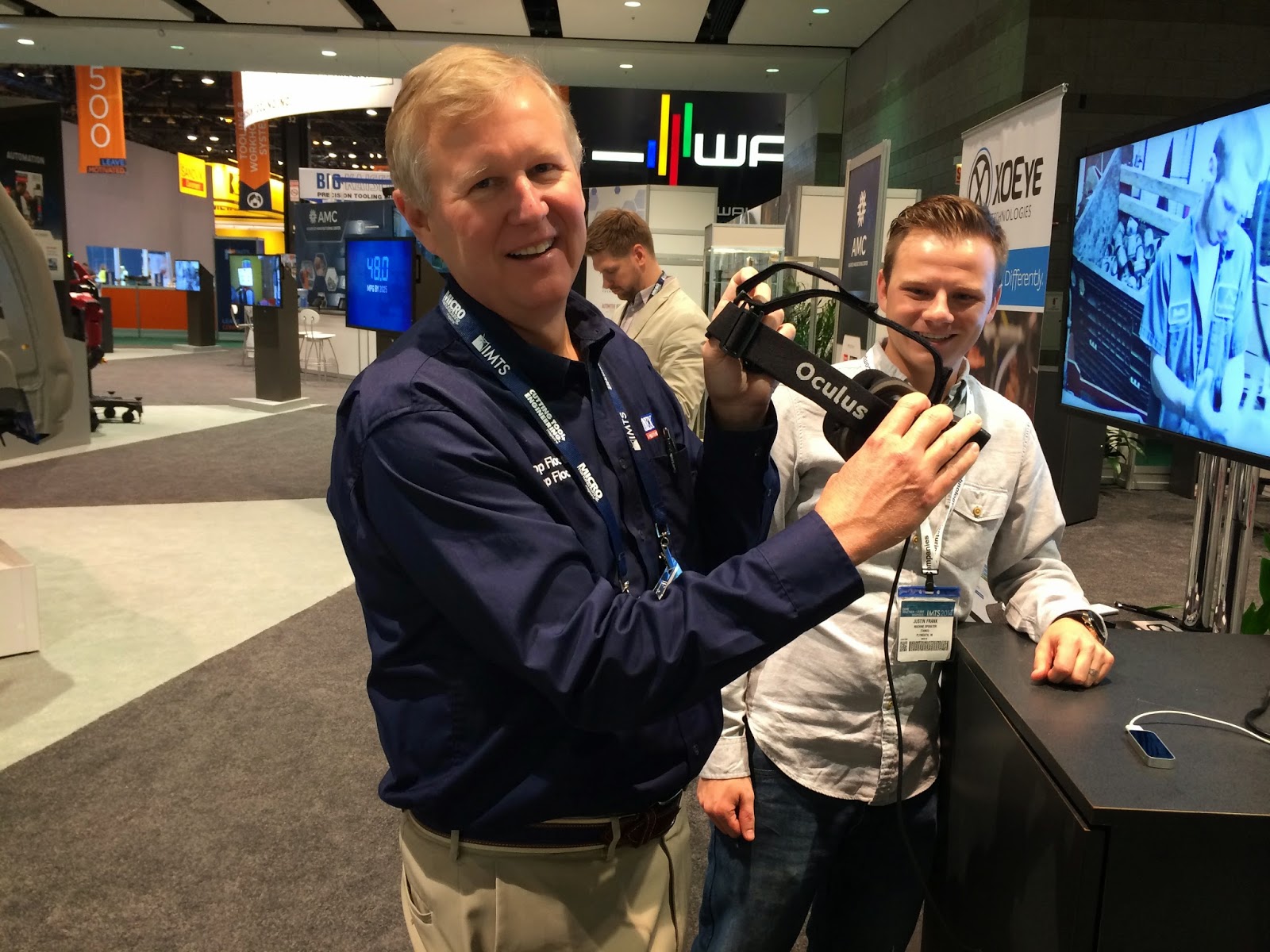 Above is me holding the Oculus Rift. 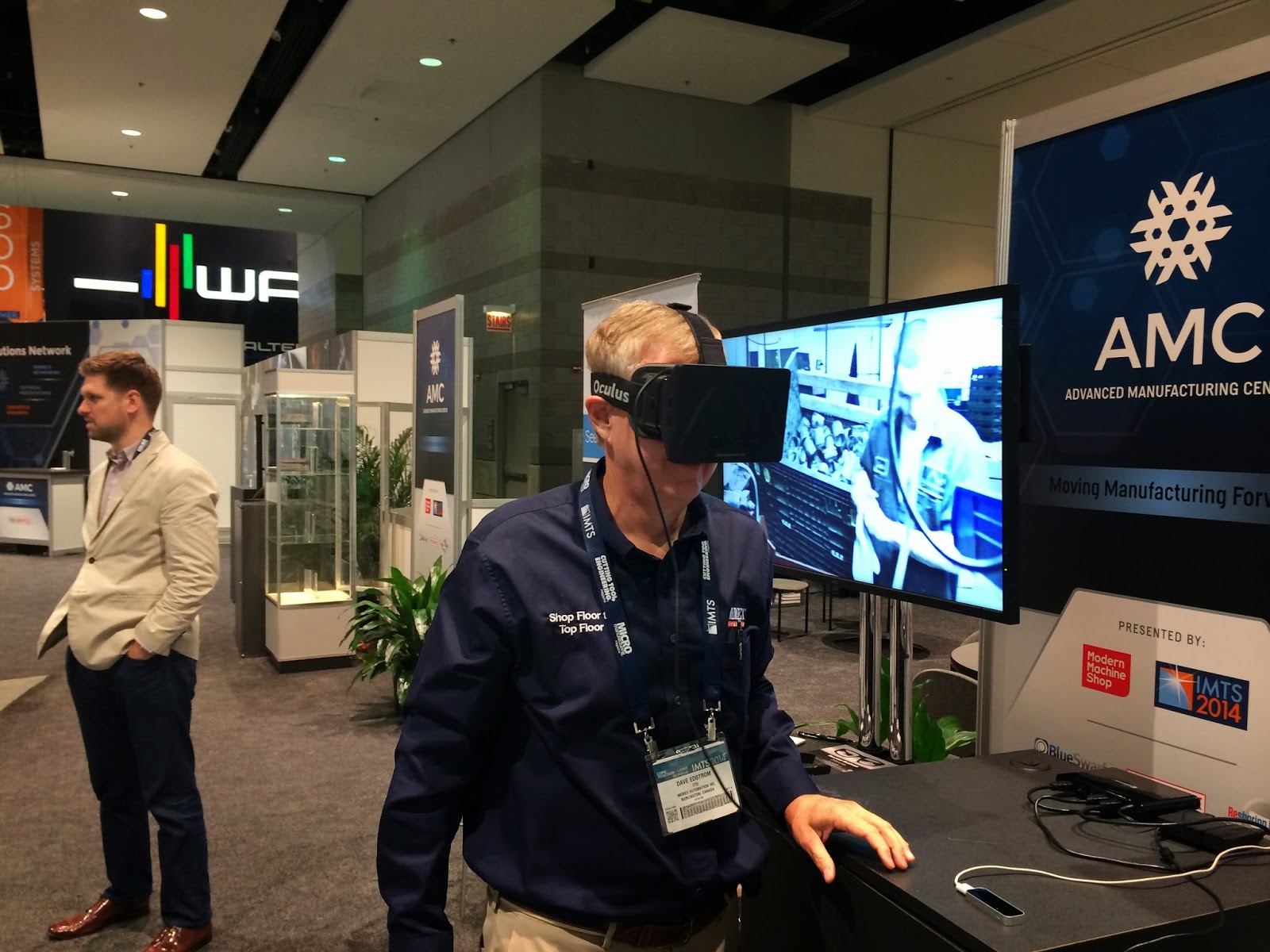 Above is my getting ready to use the Oculus Rift.Above is me actually using the Oculus Rift and nearly following over.  Interesting technology.  It is not quite yet ready for prime time IMHO. 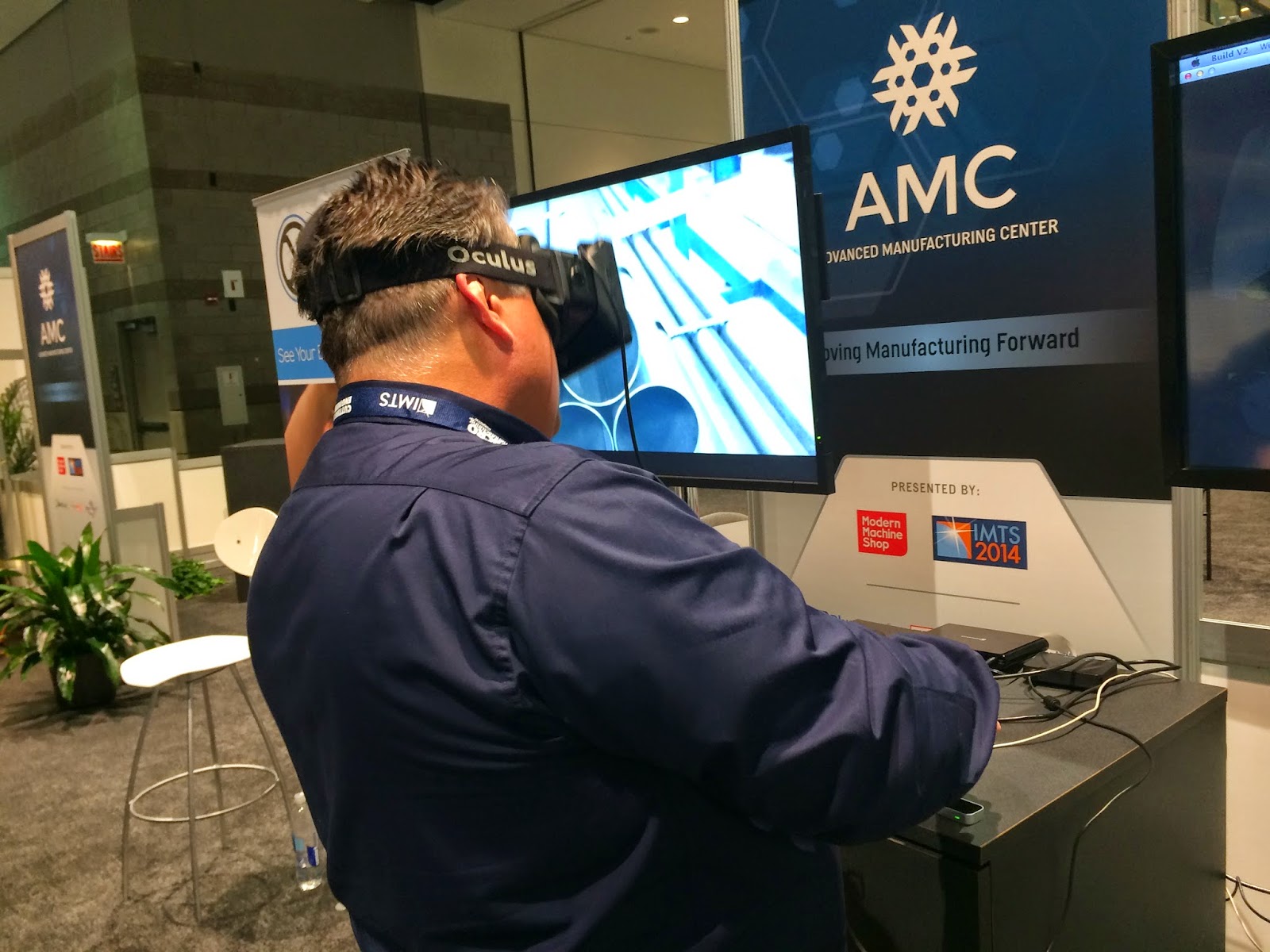 Above is Dave McPhail getting ready to use the Oculus Rift.

Above is Dave McPhail using the Oculus Rift. 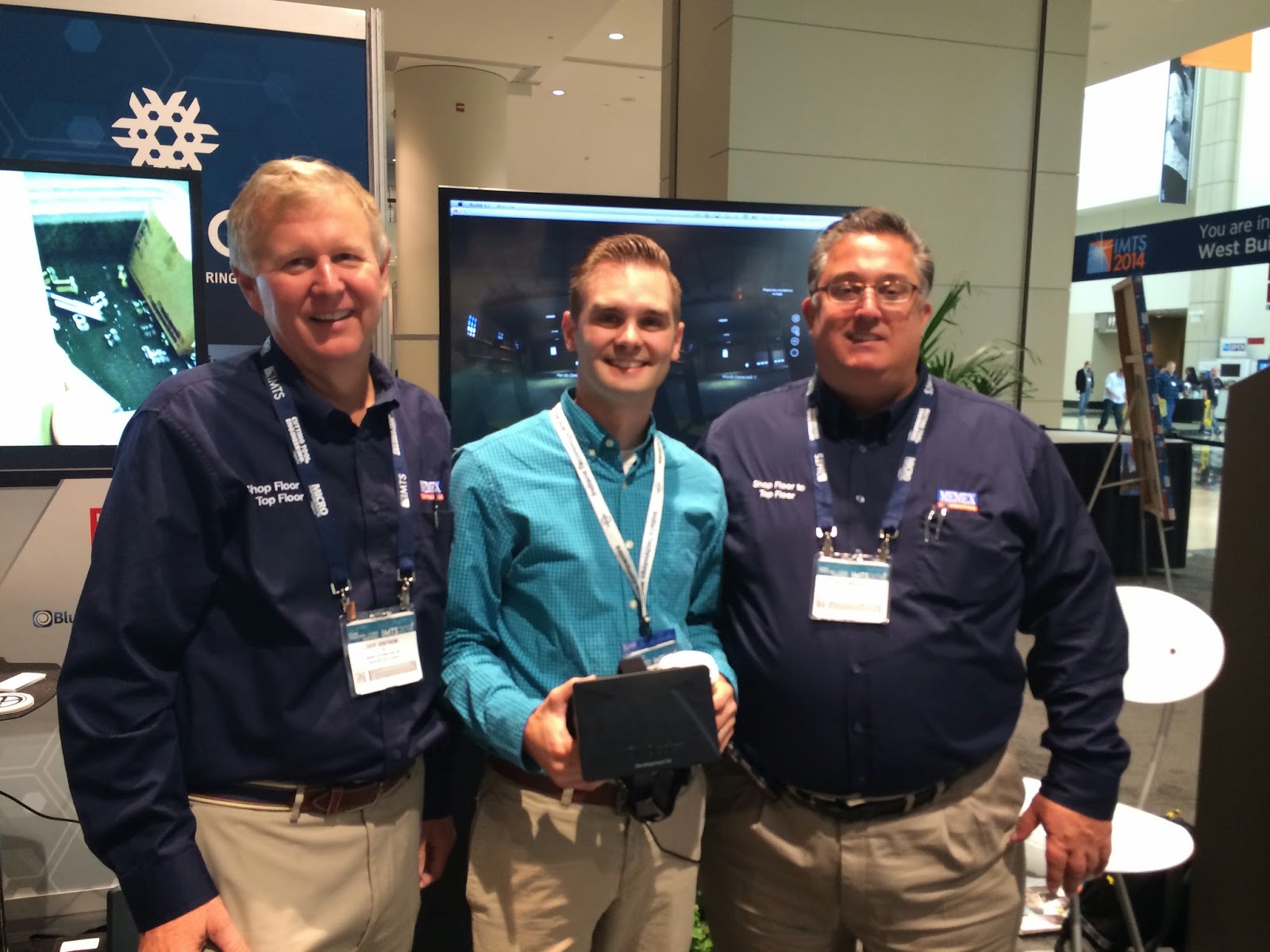 Above is me, Joel Neidig of ITAMCO and Dave McPhail.  Joel is the Michael Jordan of Manufacturing – a true rock star!Above is the world’s largest 3D printer that was printing an entire car out of carbon fibre at IMTS 2014Here is Doug Woods, President of AMT, driving it off the platform. 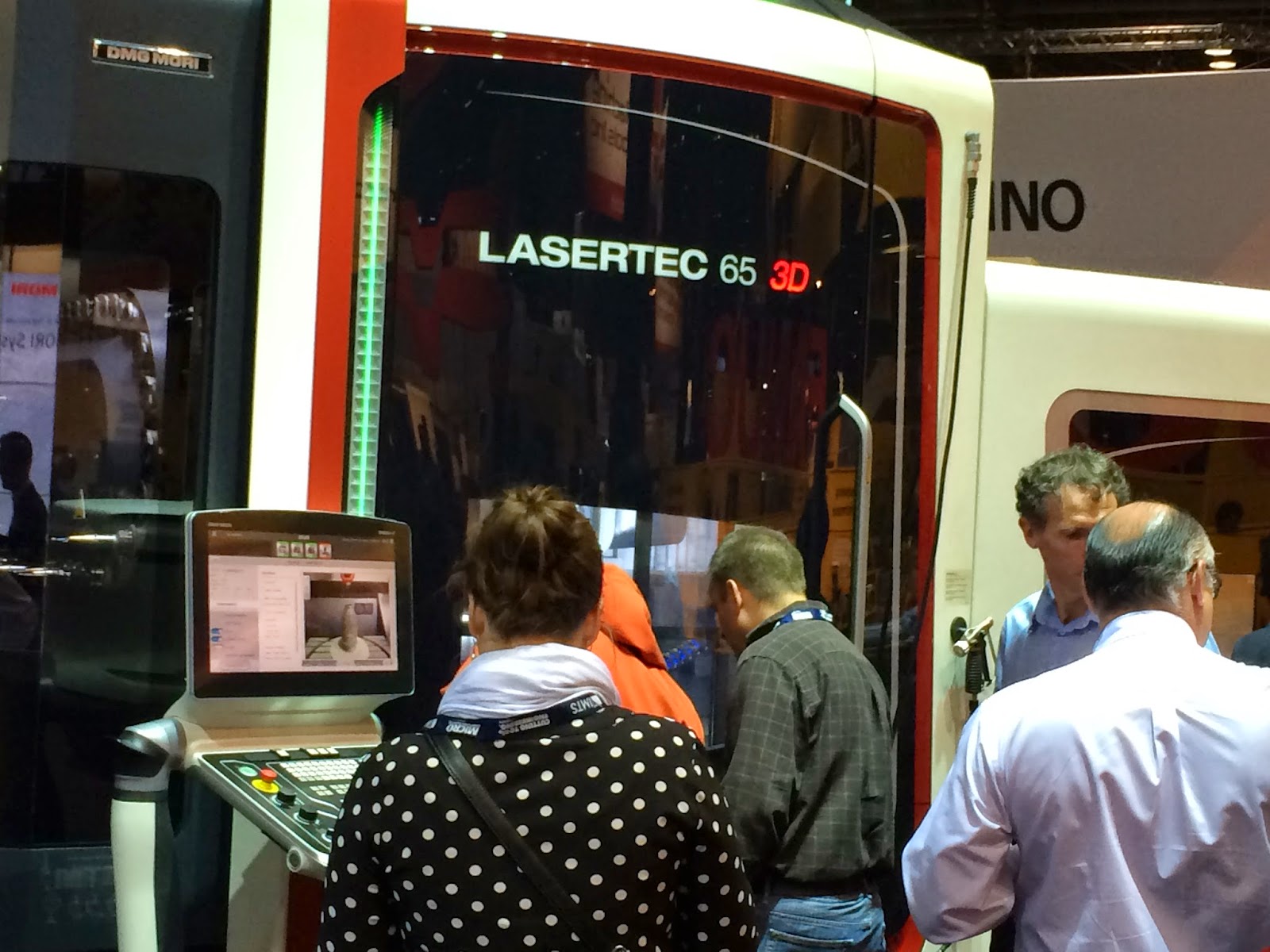 Above is the world’s first subtractive/additive machine tool at the DMG Mori-Seiki booth. 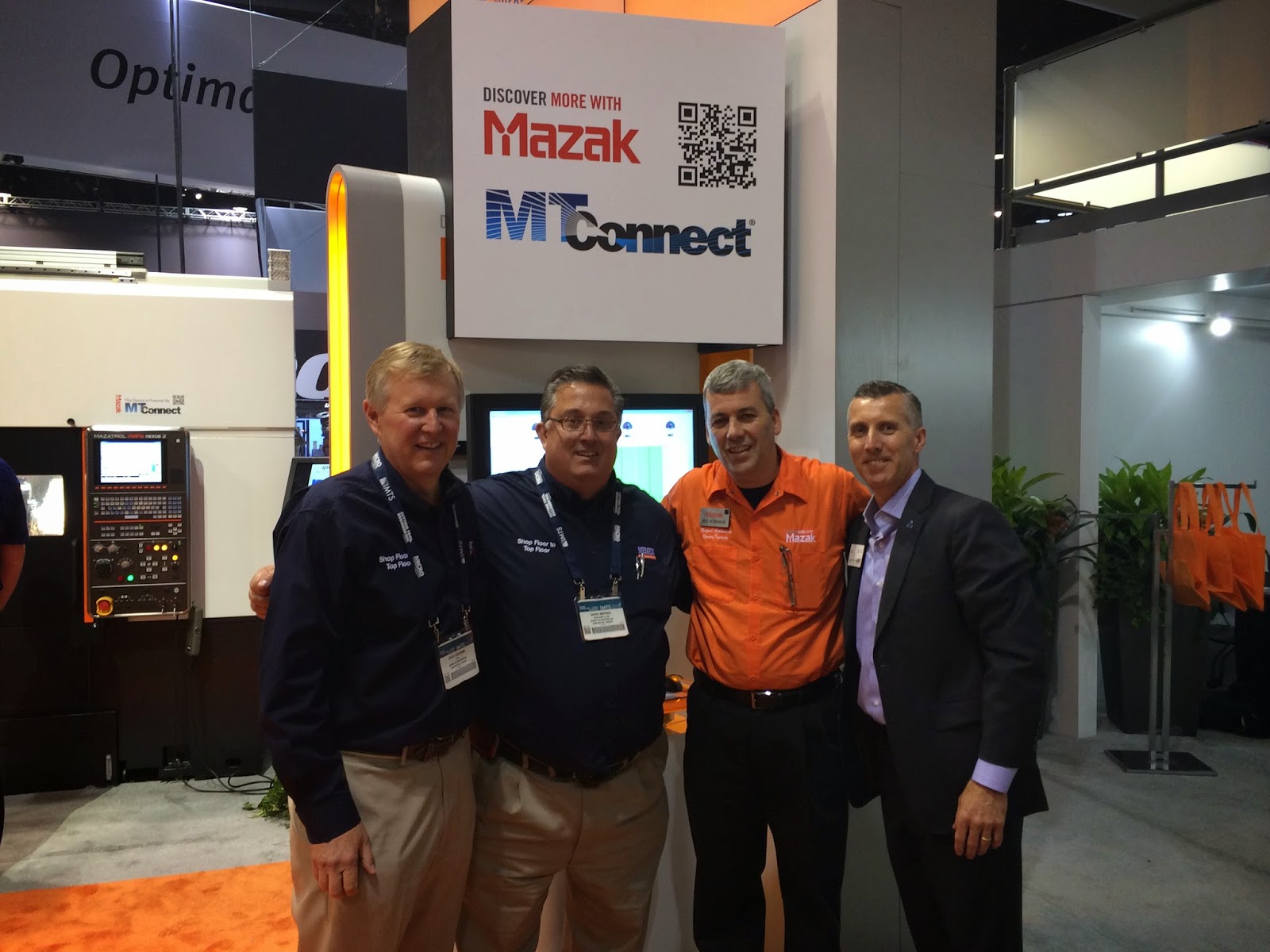 Above is me Dave McPhail, Neil Desrosiers of Mazak and Doug Woods President of AMT in front of the MTConnect booth at Mazak where they were also showing our MERLIN product. 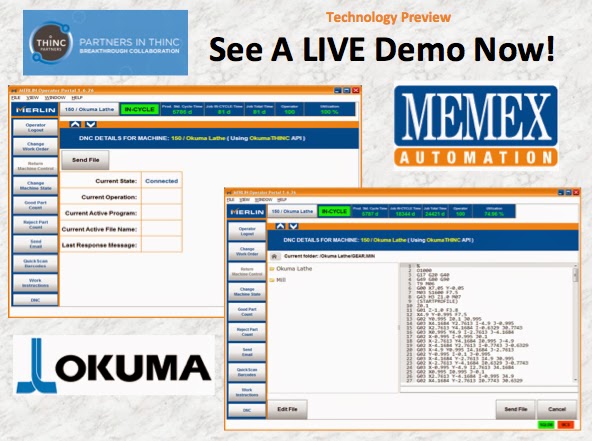 Above is the key slide on one of the products that we were showing in the Okuma booth – our DNC product using Okuma’s THINC API.  Brian Sides gave us a an area where we could show off our close relationship with Okuma.  It was great for us to be in the Okuma booth!  We also showed off our MERLIN product as well.On Saturday afternoon (the last day of show) things slow down so Dave McPhail took advantage of the the slow down to checkout out some of the cool stuff at IMTS 2014.Above is a Fanuc robot moving a car frame around like it was 3 pounds. 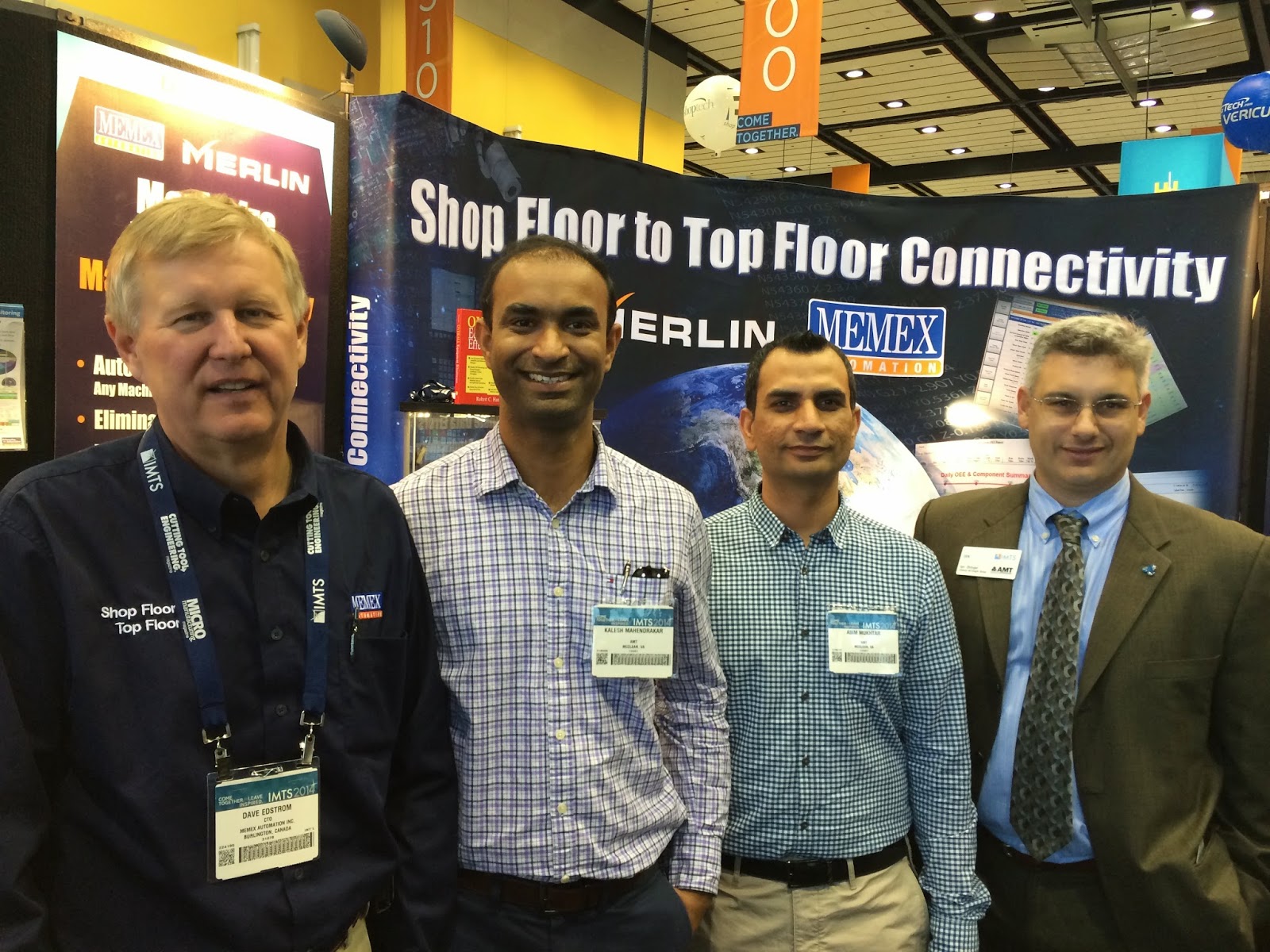 It was very cool that Kalesh, Asim and Ian of the MTInsight stopped by our booth.  The MTInsight guys are kicking butt and taking names with the best customized business intelligence platform on planet earth.IMTS 2014 was record breaking and could NOT have gone any better for Memex Automation!
0 0 Memex /wp-content/uploads/logo.png Memex2014-09-16 10:44:382014-09-16 10:44:38IMTS 2014 Huge Sucess for Memex Automation!

Our friends at Automation.com picked up the Mazak uses MERLIN MES and MTConnect at Kentucky plant success story.

This is a fantastic example of how our technology at Memex Automation is transforming manufacturing.

Below are a few snippets.  Here is the opening:

“July 28, 2014 – The American manufacturing renaissance is in motion at Mazak’s plant in Florence, Kentucky with the help of MERLIN (Manufacturing Execution Real-time Lean Information Network) from Memex Automation. MERLIN is a Manufacturing Execution System (MES) and Machine-to-Machine (M2M) communications platform that quickly and cost-effectively isolates productivity issues so everyone from the shop floor to the top floor is able to understand what must be done to maximize efficiency.”

Below is a quote from a true thought leader in manufacturing and MTConnect,  Brian Papke, President of Mazak:

“Mazak’s IT department started the efficiency drive by implementing the MTConnect protocol to accurately determine machine availability by using Overall Equipment Effectiveness (OEE) as a standard measurement. “This total embrace of MTConnect is intended to make a statement,” said Brian Papke, President of Mazak, who personally drove the project. “We want to be a leader in both promoting and implementing MTConnect.  We want our example to show the importance of moving toward data-driven manufacturing.  MTConnect is an essential part of what makes data-driven manufacturing possible.”

It’s a GREAT article and below shows how well Memex Automation did in the selection process:

“Ben Schawe, Vice President of Manufacturing, began the hunt for a commercially available software package that could produce meaningful reports that both production and management teams could act upon. The company formed a task force to evaluate commercially available software solutions.   After an exhaustive search, Mazak selected MERLIN. The evaluation committee included senior executives from President Brian Papke on down, and ultimately they all voted for MERLIN, with 10 out of 10 votes in favor of the Memex Automation product.”

Mr. Schawe states just how successful MERLIN has been so far!

“At Mazak, Schawe stated that MERLIN-related efforts to reduce downtime have so far yielded a 42% improvement in utilization for the monitored machines. In addition, his company reduced operator overtime by 100 hours per month and 400 hours per month of previously outsourced work was returned to Mazak. He also praised the advantage of MERLIN’s ability to take the guesswork out of tracking machine utilization. “We can tell at a glance how we are doing, and the basis is in real-time and historical data,” he explained. “There is so much information, accurate and detailed, all easily accessed whereas before we were it was difficult to find information if it was even available,” he added.”

The article is very well written and really drives home the power of Memex Automation’s MERLIN at Mazak!